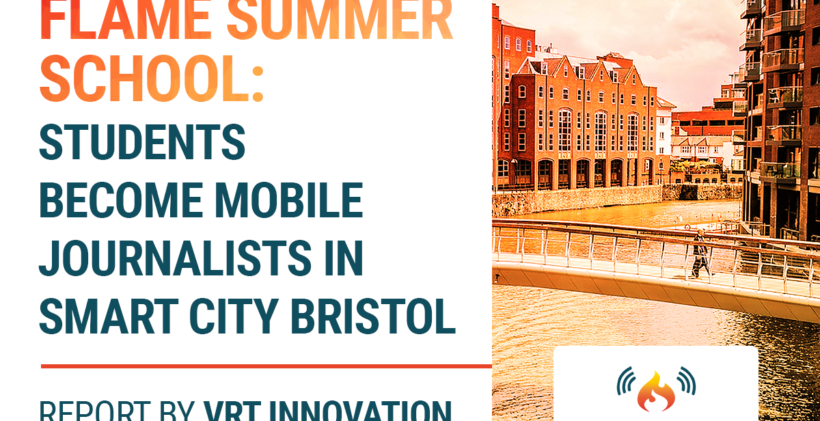 The FLAME summer school allowed students to experiment with media applications in a smart city environment and become mobile journalists for a day.

From 11-13 of July 2018, VRT Innovation took part in co-organizing the first edition of the FLAME (Horizon 2020 European research project) Summer School to let students experiment with media applications in a smart city environment. During the summer school, students were able to experience the excitement of being a mobile journalist (MOJO) and the intensity of being a news editor in a media company. This simulation game was designed by a group of enthusiastic researchers from the innovation department at the Flemish public Broadcaster VRT, namely Klaas Baert, Sandy Claes, and Marc Godon. 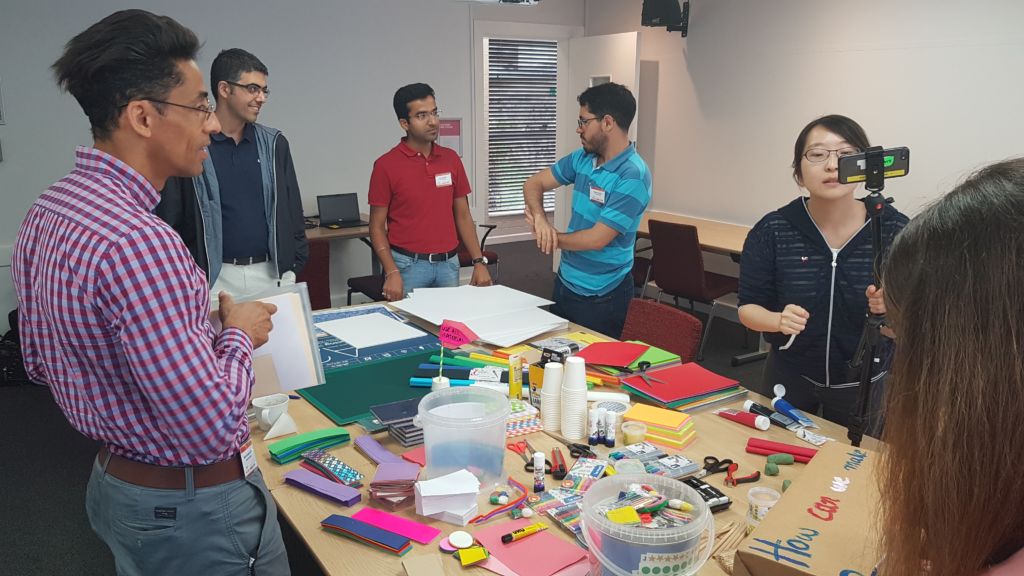 Three student teams (consisting of 3 or 4 people) were sent out to explore the city with a semi-professional MOJO kit, which included a smartphone, microphone, and tripod. As representatives of a media company, each student team had to create two news bulletins on the topic “How to Make Bristol Great?”. Utilizing the smart city environment, two students from the team (i.e. interviewer and cameraperson) had to upload their videoclips over the mobile network to the headquarters of the summer school. At this HQ, the director of the student team was able to guide the city team by using the incoming interviews, while the editor could simultaneously work on editing the news items.

Before entering the city centre, the students were introduced to novel design approaches for future smart cities by design researcher Dries De Roeck, from Belgian design company Studio Dott, followed by an overview of recent trends in journalism and a quick guide on critical issues in storytelling and video shooting. They created their own physical intervention, which they could use as a conversation starter for their interviews. For this, inspiration was found in the participatory public installation work of the American artists Candy Chang. 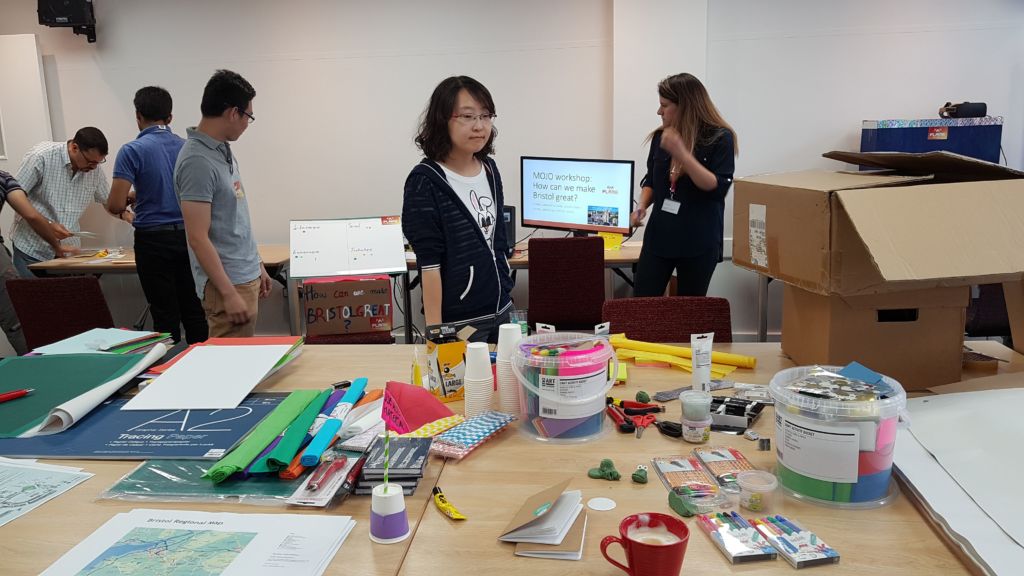 So, what would make Bristol great? Interviews took place nearby at Temple Meads, Millennium Square, and Bristol Museum in the city centre. Some Bristolian suggestions were: “Bristol is already great, but to make it even greater, you need better public transport, less pollution, and a cleaner city” and “Population is growing, so infrastructure is essential”. Others highlighted Bristol’s diversity and the importance of continuous progression, supporting the people living in the city. Someone stated: “They are destroying a lot of traditional buildings and architecture. I like it the way it is, part of the culture of the city is its old buildings and its history”. Despite uncertainty about economic challenges and what lies ahead, interviewees expressed their enthusiasm about living in Bristol. 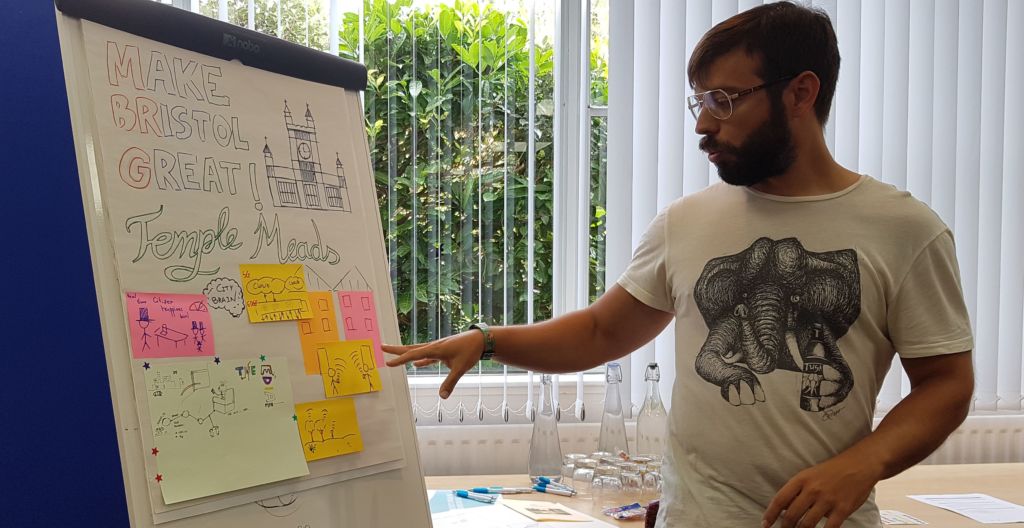 At the end of the workshop, students were asked to pitch their findings and how the FLAME platform could be of assistance to MOJOs. They stated that media should bring attention to social issues. As such, technology should support media makers in the design process, so that they are able to focus on these issues. Even more, they suggested a variety of use cases that leverage the computational power at the edge of the network to assist the future journalist, such as live video editing, 360-degree video, 3D interactions, augmented reality, etc. One of the students expressed in a more metaphorical futuristic way: “it’s about building a city brain that connects everything with everything (even cross-species) and is able to publish city happiness levels in real time.”

Marc Godon, a researcher at VRT Innovation who helped design the summer school simulation, said: “I was surprised by the student’s enthusiasm. I assume it was quite a stretch for the participants (ICT students, and smart city professionals) to jump into the world of media. Maybe they were attracted by the question of what citizens could think and imagine about how to make their city great? Maybe, they were attracted by the empowering roles of being a journalist and storyteller or being a creative media maker? I think it’s the mix. We believe that a positive, constructive, and creative inspirational focus in media making can empower citizens to make their city: smart, life-sized, and full of great stories.”

VRT Innovation would like to thank all of the participating students, the University of Bristol as organizer and facilitator, and all partners of the FLAME consortium for achieving these exciting results. 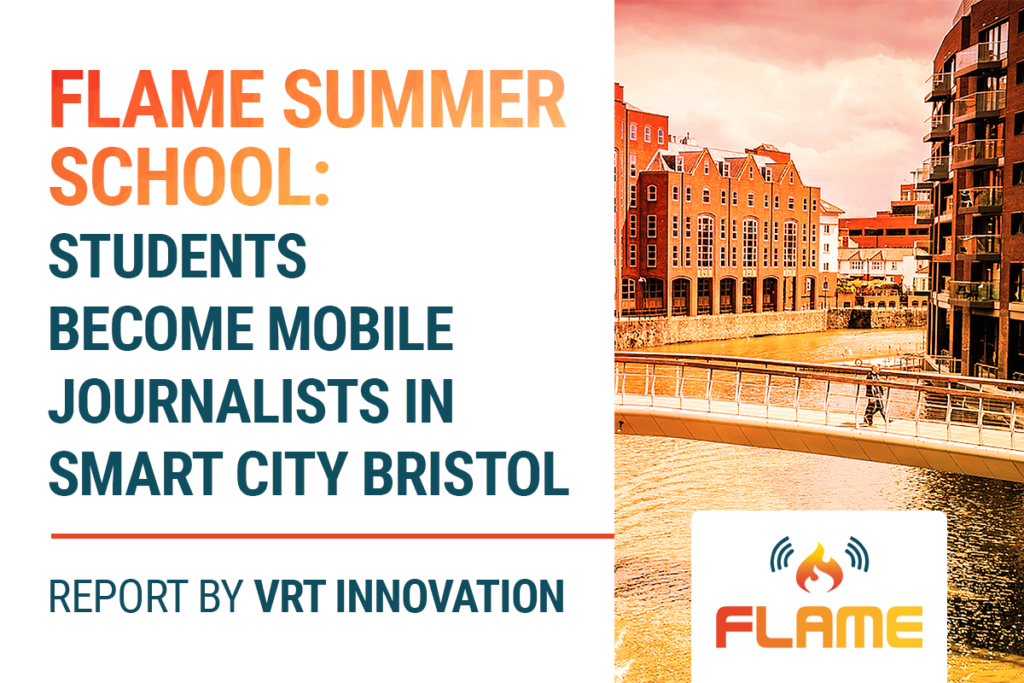