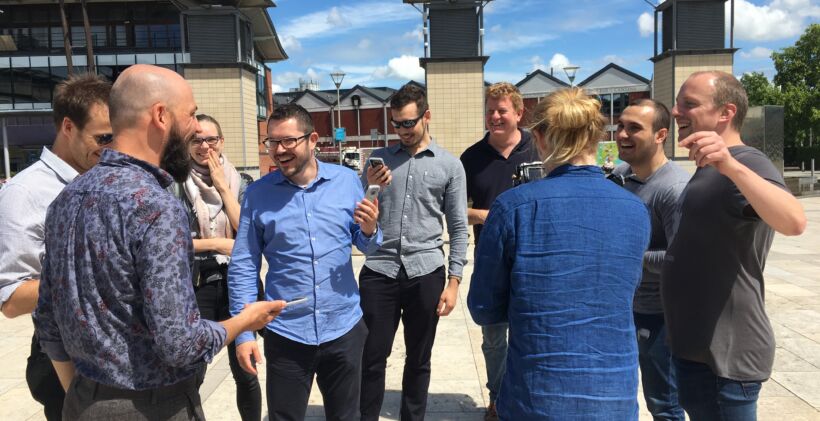 FLAME – a world-leading consortium of pioneers in 5G networking and technologies has been showcasing the latest innovations across a four-day event at the University of Bristol’s Smart Internet Lab.

The teams, known as Hackers, were challenged to create inclusive, participative and entertainment experiences which could potentially be enjoyed by the public.

Various ideas were presented to a panel of judges, including the idea of sharing virtual personal memories around the city, the concept of simulated challenges based around the cities statues and also the proposal of an application which would enable a dialogue between residents and local authorities using the infrastructure when citizens notice environmental concerns.

Judges awarded the first prize to the ‘Aces’ team who proposed an innovative application idea aiming at enabling a two-way conversation between users and their environment, such as an immersive tourist experience of the city throughout history.

The FLAME consortium, coordinated by the University of Southampton, consists of 12 partners across six countries, supported by Horizon 2020, the largest ever European funding programme for research and innovation. FLAME is transforming the user experience by delivering faster access to media and new services through 5G.

The project’s coordinator Michael Boniface, Head of the University of Southampton IT Innovation Centre, said: “We have been demonstrating the benefits of 5G, which for FLAME is to localise interaction and delivery of content between citizens who want to publish and consume that content without necessarily relying on distant public clouds.”

The project’s technical manager Dirk Trossen, Senior Principal Engineer at InterDigital Europe, said: “The FLAME platform has been designed with 5G in mind, providing novel solutions to a 5G network system that enable lower latency, higher efficiency and novel interactions with users while being deeply embedded into emerging 5G standards.”

Members of the public were able to get a hands-on experience of commercially viable new innovations as part of the event held in Bristol and trial the competing ideas.

They were also able to experience how it is possible to be immersed in massive media events from a remote location. Through 360-video and live streaming, project partners Mativision demonstrated the virtual reality capabilities and how this technology can be used to assist those who hate crowds at concerts or who have a disability preventing them from accessing the event.

In another showcase, ETH Zurich University showed how urban spaces can be used for gaming, harnessing augmented reality technologies.

By creating applications in an urban setting, the event was able to assess the viability of FLAME as a platform that can host exciting new applications in 5G which have stringent demands on latency and throughput, as well as demonstrate a wide variety of and the potential for exciting applications and use cases for this technology in 5G.

Professor Dimitra Simeonidou, Director of University of Bristol’s Smart Internet Lab, said: “As proud hosts of the 5G UK Test Network, the UK’s first urban 5G end-to-end testbed, what impressed me was the creativeness and civic-minded nature of all the presentations – all the ideas were centred on helping citizens share a better understanding of their city.”