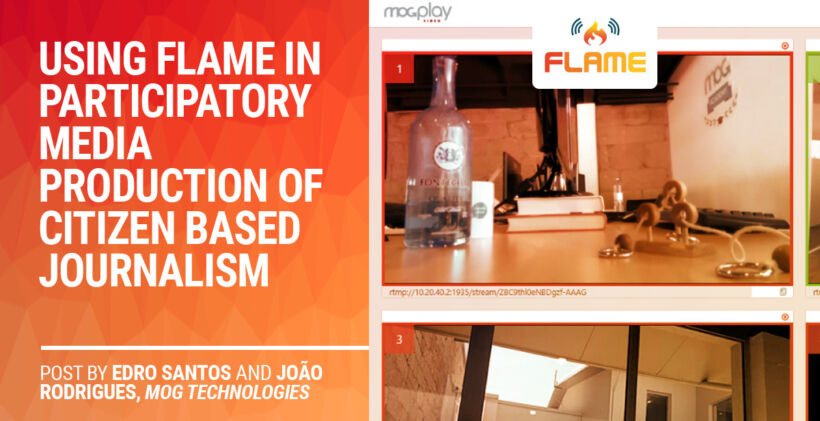 Using FLAME in participatory media production of citizen based journalism

In the aftermath of past and recent events (such as the London Underground explosions, in July 2005, and the Paris incidents at the Bataclan in November 2015, and the fire in Notre Dame in April 2019), common citizens revealed, first-hand, photographs and videos of those events. Therefore, concepts such as crowd journalism, citizen journalism and crowdsourced journalism have been emerging, evolving and gaining increased credence. These are based on a common premise – ensuring a fruitful cooperation between citizens and media producers/journalists to rapidly create news and/or to provide different personalized perspectives of breaking news.

However, there are many existing constraints to a wide implementation of crowd journalism as well as the limitations that current market solutions exhibit. MEMPHIS – Massive Engagement of Media Producers for Highly Innovative Smart cities (an open call project promoted by MOG Technologies) – was designed to address the urgent critical challenges in bringing together common citizens and the media industry in the same plateau. It does this by providing and testing a crowd-oriented Cloud-based ecosystem that can be used by both citizens and media professionals to create added value live media (for video coverage of events or breaking news). MEMPHIS uses the FLAME platform to ensure quick deployment of infrastructure (Cloud, edge), provide the necessary network slices, configure and run the ecosystem and deploy services that allow low latency and high availability with the necessary QoS for citizens, event organizers, journalists and final consumers.

The MEMPHIS ecosystem covers the entire content creation process. It comprises a Cloud-based crowd streaming ecosystem with an application for citizen-based media production, a Cloud-based live switcher and a Cloud-based video mixing station. MEMPHIS  supresses the existing constraints, stands out from current market solutions and allows for the wide application of crowd journalism.

At a certain breaking news location, the media producer should ensure the existence of an appropriate wireless coverage infrastructure, with an adequate number of access points to which the citizens can connect their smartphones to start streaming live video feeds. Users, provided with an application, can connect to different access points. The users capture what they consider to be the most interesting images and stream them out to the MEMPHIS application operating on top of the FLAME platform.

The multiple video feeds are then fed to a control room. Here, an editor/director can visualize them in a multiscreen view and choose the most appropriate (according to their relevance to the audience). The feeds are distributed to the internet or sent to large video screens spread out all around the event venue (providing the audience with their own point of view of the event) or to another suitable location, such as a TV station’s headquarters.

The implementation/experimentation of the MEMPHIS ecosystem was achieved by executing the following three-phase plan: