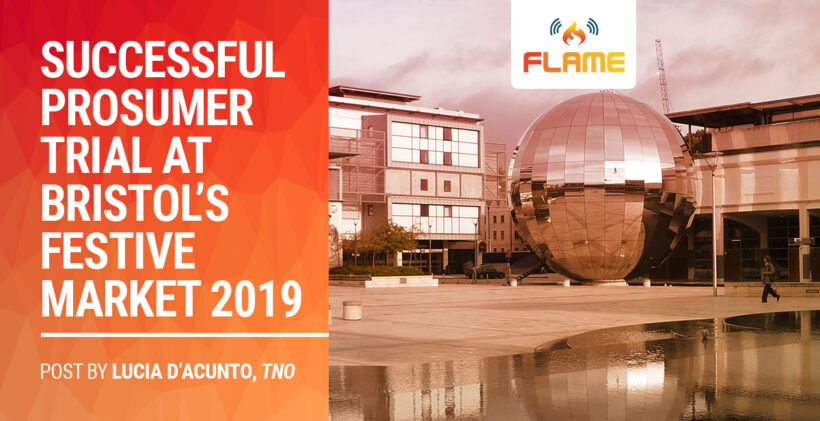 TNO’s localized crowdsourced live video production and distribution framework, the Prosumer framework, has been successfully validated during a trial at Bristol’s Festive Market on the 5th of December 2019.

The TNO’s prosumer framework, which leverages FLAME edge computing capabilities to provide users the ability to share their videos in real-time, was tested in Millennium Square, Bristol, on the 5th of December 2019, by 14 participants, divided into two trial runs of 7 participants each, which took part to the experiment concurrently (to ensure enough videos were shared at the same time, and that there were enough simultaneous viewers). During the trial, two access points, and corresponding edge nodes, were used.

A total of 81 streams were recorded, with a mean duration of 102.6 seconds. During the first run, participants recorded more videos compared to the second run (65 vs 16), but of a shorter duration (64.9s vs 255.7s). From the total of 81 streams, three streams attracted a high number of distant views (14, 17, and 12 views) which were also of long duration (525, 427, and 995 seconds). Additionally, 59 streams did not receive any views. This viewing pattern, combined with the edge capabilities of the FLAME platform and the smart local ingest and distribution of the Prosumer framework, made it possible to realise a downlink bandwidth saving of 93%, as compared to a traditional Prosumer system with cloud-based ingest and distribution.

The user experience of the Prosumer framework was also rated positively by the participants: 78.57% of the participants declared that they enjoyed using the app very much. The user evaluation further indicated that a sufficient amount of users (45%) enjoys producing content, an important prerequisite for prosuming apps to thrive.