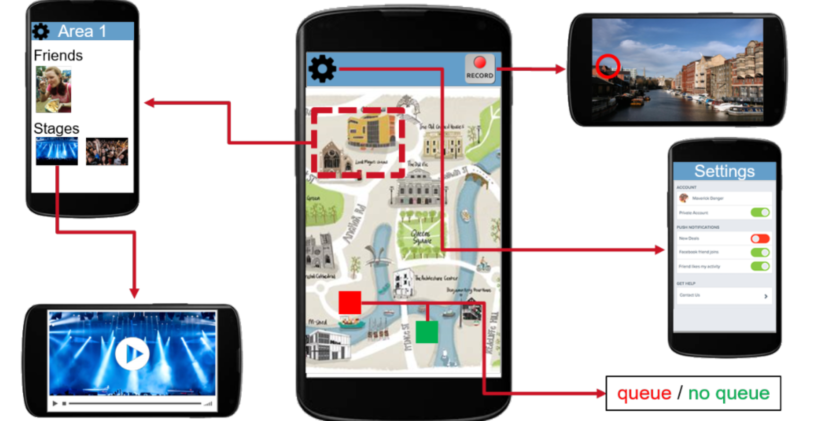 During the past five months TNO, one of FLAME’s first Open Call winners, has been building and testing the components of its Prosumer Framework. The framework is now ready and will be evaluated on the Bristol instance of the FLAME platform at the end of April.

The TNO Prosumer framework leverages the FLAME Infrastructure to create a localized crowd-sourced multimedia production and distribution workflow. This enables today’s mobile producers of multimedia content to serve their content in real-time to other users, who may be both located nearby or remotely. At the same time, it drastically reduces the bandwidth utilization, both in uplink and downlink, as compared to traditional crowd-sourced multimedia production and distribution services. This will enable regular users in a city to share their experiences in real-time with others while not burdening the internet backend.

The architecture of the Prosumer framework exploits the edge processing capabilities of the FLAME platform. It is based on the idea that the actuality of the content is more important for consumers who are near the action or in a place of interest, compared to consumers who are further away. With this in mind, the Prosumer framework uses RTMP streams for users watching live content close to the original producer and HTTP Adaptive Streaming (HAS) for users further away.

The app for the end users has a series of functionalities such as Stream Discovery, Video upload and Video player. It also provides contextual information (such as queue lengths) for live events.

In the scope of media delivery, TNO also identified ‘discoverability’ as an important feature. With potentially hundreds or thousands of streams uploaded constantly to such a prosumer framework, finding relevant and interesting content is essential for end users.

To enable this, TNO developed an image processing module which performs – in real-time – object, people and landmark (targeting Bristol’s Millennium Square) recognition on each video keyframe. The resulting information is then sent alongside the video metadata to the Prosumer app, and users can browse the labelled content. This module is versatile and can easily be updated to reflect the kind of content being shared in the location where the platform is deployed.

As well as the evaluation of the Prosumer framework in Bristol at the end of April, TNO will perform experiments with real users at two public events in Bristol this summer. This will give us insights into how our framework is perceived by end users and into its performance (in terms of latency and bandwidth reduction) within the FLAME platform.

Blog post by Lucia D’Acunto and Alexandre Gabriel from TNO