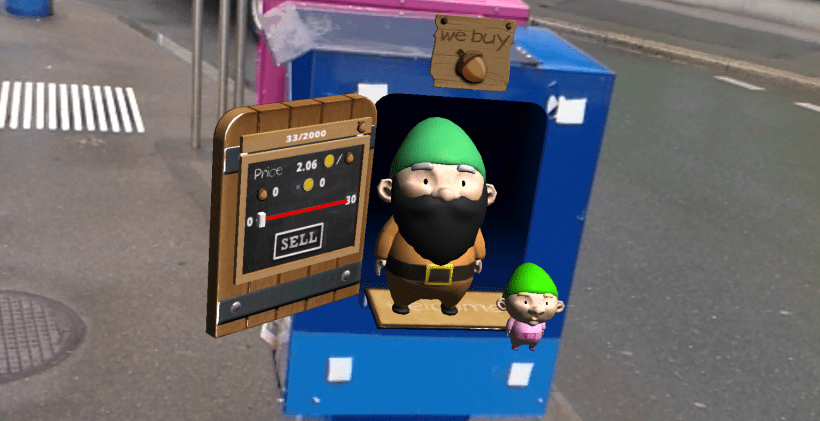 The Game Technology Center (GTC) of ETH Zurich is a research lab developing advanced game technologies based on solid computer science expertise and exploring how these can affect gaming and players’ behaviour. This article describes how gaming is evolving with new technologies, and how platforms like FLAME play an important role in this transformation.

Gathering 1.8 billion players from all ages, gaming is an important and growing source of entertainment, interaction, and education. From players enjoying an online game in their room to a family sharing a moment around a console, gaming takes various forms and attracts more and more people. As technology evolves and grows, new ways of gaming appear, making the activity more interactive or more immersive.

In particular, as mobile device performance continuously increases, video games are now always at hand, moving with their players, accompanying them during their commutes all over the city. Going even one step further, Augmented Reality (AR) enables the virtual world to blend into the real world, connecting the digital space and the physical space.

This technological progress transforms the landscape of gaming. From being restricted to a seat or a room, players can now live their gaming experiences at much bigger scales, such as an entire city. Moreover, the virtual world benefits from localisation information to adapt to the real world. Games can now be embedded in meaningful places, or react to the position and movement of their players. The ordinary lamp post on the side of a road can become a location for major in-game quests to initiate, it can become the house of a non-playing character, personally greeting the players as they come by. The possibilities are endless.

These perspectives are promising and are progressively bringing new ways of gaming. Some successful games are already demonstrating benefits: in 2017, Pokemon Go, a localised augmented reality Pokemon game, recorded 650 million downloads for a revenue of $1 billion since its launch in 2016 and of $4 million on the first day. More generally, technologies like AR are believed to enable more empathy and connection through games and have a huge potential: AR market represented $640 million in 2015 and is expected to reach $100 billion by 2024 [1].

At the core, city-wide AR games rely on a high-performance and low-delay network infrastructure to provide a satisfying user experience. It is then particularly important to rethink our network platforms and their functionalities to explore the new gaming possibilities to their full potential. As an example, the Game Technology Center is building “Gnome Trader”, a city-wide AR game based on the FLAME platform. In this game, the players travel around the city to collect and sell resources in geo-localised trading spots, using AR for immersion. The players can also add their own game objects into the real world by planting virtual trees using augmented reality. This game encourages real-world interactions, gamifies commuting activities in the city, while implementing elaborated economic game mechanics.

In this game, the mobility of the player is the main component for all the game mechanics: it influences the economy because the players move the resources across the city; and impacts the gaming world because the players conquer the space with their own game objects. The players should be rewarded for moving, and, as a consequence, the game has to provide a high quality of experience even when the player is extremely mobile. And in particular, the game has to adapt to the density and spatial distribution of players evolving over the day.

For such games, the FLAME platform can bring three strong improvements on the quality of experience: by ensuring the appropriate game content to be available to the player along all her commutes; by ensuring the adaptation of the platform with the variations of players’ density; but also by providing computational support for the heavy components such as augmented reality or tree generation or by ensuring a synchronization of the game world state all over the city.

With Gnome Trader, the GTC is building an example strongly benefitting from the FLAME platform. Moreover, experiments in this ecosystem will provide insights about how the players interact with city-wide games and how they behave in various different set-ups. This new knowledge will be made available for other actors in the field to build up on it and create new innovative ways of gaming.