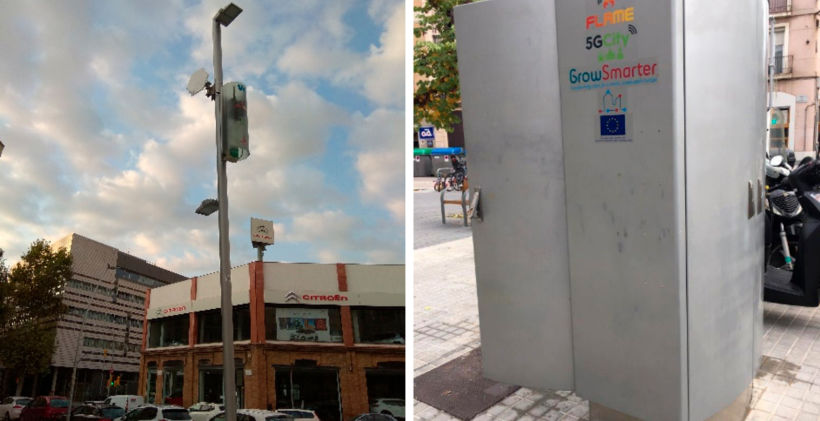 During the months of October and November 2018, the FLAME replication testbed in Barcelona was finalized and now it is ready to host the first experiments.  The FLAME infrastructure extends across the city and it is the outcome of a collaborative effort of the Barcelona city council (IMI) and i2CAT, both partners within the FLAME consortium.

The testbed infrastructure is composed of three tiers:

The on-street deployment is located in a pedestrian area of the 22@ district, with plenty of traffic-free, walkable space for experimenters. The area features four lamp posts equipped with Wi-Fi that enable the RAN for end user connectivity. Further, the lamp posts are interconnected over directive antennas via a wireless backhaul, also based on Wi-Fi. A street cabinet close to the lamp posts hosts the edge computing element, where experimenters can instantiate any services that require to be as close as possible to the users of the media services for low delay and high throughput. Services that require heavy computing and are not time critical can be deployed in the main DC, where more powerful computing nodes are available.

The Barcelona FLAME testbed will allow testbed users to deploy their experiments, benefitting from FLAME platform features, which not only allows a fast and dynamic deployment of services, but also fuels the performance of the media services running on the platform. The first experimenters to be able to work with the infrastructure will be the winners of the first Open Call.

If you’re interested in getting involved, FLAME’s second Open Call is open to submissions from 5 December.